All the pieces are in place for the next phase of the China-Pakistan relationship to be built on renewables, financial resilience and tackling the climate crisis.

President Xi Jinping’s recent announcement that China will not “build new coal-fired power plants abroad” but will instead “step up support for other developing countries in developing green and low-carbon energy” has set high expectations ahead of the United Nations Climate Change Conference, known as COP26, in November. As the coal pipeline shrinks, it is time to examine how China can help other countries, like Pakistan, achieve their climate goals while also managing the fiscal strain of doing so.

Since 2008, Pakistan has received the second-greatest amount of China’s overseas development finance of any country, at nearly USD 40 billion. (Venezuela has received the most, at more than USD 58 billion.) Pakistan is also a strategic destination for China’s overseas investment, with the two countries jointly establishing the China-Pakistan Economic Corridor (CPEC) in 2015 as a pillar of China’s Belt and Road Initiative.

Of China’s development finance for Pakistan, 30% has gone into the electric power sector. Chinese policy banks and companies have supported 13 gigawatts (GW) of generating capacity in Pakistan since 2012, with an additional 7 GW in the pipeline. Coal represents nearly half of this total capacity, raising the question of what will happen to the 4.7 GW of planned coal projects in the wake of Xi’s announcement, and how China’s pivot to green energy can be reflected in this relationship. 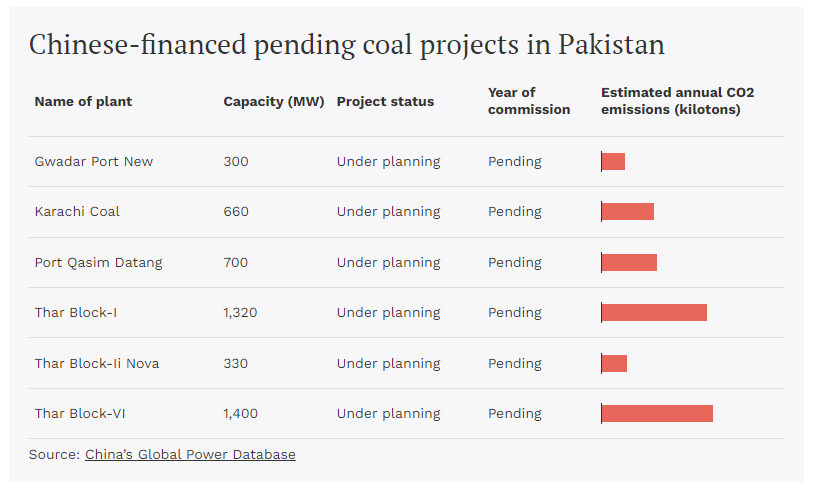 If these planned plants come into operation, together they would emit nearly 24 million tons of carbon dioxide per year, increasing Pakistan’s current carbon dioxide emissions by 10%.

In addition to producing carbon dioxide emissions that contribute to global climate change, these coal plants would also produce damaging local air pollution. Researchers affiliated with the Boston University Global Development Policy Center developed an open-source approach for evaluating the local health impacts due to particulate matter from air pollution. They used the Chinese-financed Port Qasim coal-fired power plant in Pakistan as an initial case. The study, published this year in the journal Environmental Impact Assessment Review, found that there would be essentially no increase in mortality risks if the plant used pollution-control technology. Crucially though, the environmental impact assessment documents that would indicate whether such controls were in place and being used were not publicly available.

Chinese-financed power plants in Pakistan may also encroach on vulnerable environmental areas. According to Boston University’s China’s Overseas Development Finance Database, the Karachi nuclear power complex is located within critical habitats, as defined by the International Finance Corporation’s Performance Standard 6 (IFC PS6) criteria. Both the Bunji hydropower station in Gilgit-Baltistan and the Thar coal plant in Sindh, which is scheduled for capacity expansion with Chinese funding, are located within indigenous peoples’ lands. The Neelum-Jhelum hydropower plant overlaps with both potential critical habitats and indigenous lands. Future Chinese involvement in Pakistan’s power sector, even post-coal, will need to take into account the social and environmental risks of project locations.

Concomitantly, the Pakistani government is facing a financial crunch. Many of the country’s coal plants are at risk of becoming debt burdens, especially as the government has guaranteed payment obligations to companies (many of them Chinese) that own and operate independent coal power plants. The government has been negotiating with these independent power producers to lower the payments it owes them.

Looking at the bigger picture, Pakistan has high debt exposure, with nearly USD 40 billion, or 14% of GDP, in debt to China. There are ongoing discussions between the Pakistani and Chinese governments on the payment terms and schedule for the investments made via CPEC.

At the same time, the Pakistani government has adopted the ambitious target of achieving 30% renewable energy in power generation by 2030. Achieving this target would require installed renewable capacity to be scaled up on the scale of several gigawatts, which would also require billions of dollars in new financing. China is well placed to help Pakistan overcome its capital crunch and achieve this goal by pivoting investment from coal to renewables.

China has the technical know-how and manufacturing expertise to support not only the development of wind and solar electricity-generation projects overseas, but also the associated grid and transmission infrastructure necessary to absorb and deliver that electricity to everyday users. One CPEC project involved installing high-voltage direct current transmission lines – the first of its kind of Pakistan. Chinese companies have also invested in the Quaid-E-Azam solar plant in Punjab province and several wind projects in Sindh. With a total installed capacity of 1,000 MW, the Quaid-e-Azam solar park would be one of the largest in the world.

The role of Chinese financing

Chinese commercial banks and companies can also scale up support for renewables, given the opportunities to align with Xi’s announcement while also stepping into a promising global market.

Another potential solution, as the focus of CPEC moves towards industrial zones, which are clusters of heavy industry, is for Chinese policy banks to finance renewable energy projects within these zones themselves. Doing so would directly reinforce the Pakistani government’s desire to move to value-added manufacturing, powered by clean energy.

Finally, Pakistan and China could engage in a debt-for-climate swap. A recent study by the Boston University Global Development Policy Center identified a moderate-to-high opportunity for Pakistan to participate in debt-for-climate swaps with China, in which debt forgiveness would be exchanged for climate change mitigation efforts – such as clean energy generation for industrial zones.

On the Chinese end, debt swap arrangements and a pivot towards renewables would go a long way in helping Pakistan meet its ambitious renewable energy goal and return its debt obligations to levels that are more manageable for debtor and creditor alike.

Once pivotal partners in coal, China and Pakistan have all the pieces in place to realise a new phase of their relationship; one built on renewables, financial resilience and resolve to tackle the climate crisis.